Centralina WDB Comes to the Rescue for Rowan County Employer

An initial rapid response management meeting was held with"DuraFiber Technologies"(a factory that has operated in Rowan County,NC since 1966) on Wednesday,July 19,2017. The meeting was held at 7401 Statesville Road in Salisbury (Rowan County)." The prospect of the"NCWorks Career Center-Rowan"and the"Centralina Workforce Development Board organizing a job fair for employees on site was offered to the employer at that time." The Human Resources Manager was amenable to the idea,but requested it not happen too early." On August 1st"through August 2nd,five meetings were held with the companyâ€™s employees with information from the NCWorks Career Center and community partners. 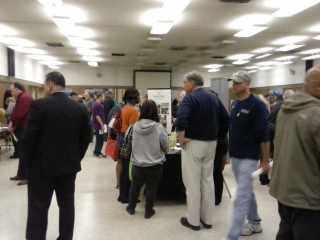 On August 31,2017 Darcell Mangan (DuraFiber Human Resources Generalist) informed Centralina Workforce Services staff that the facility would officially close on Tuesday,September 12,2017." She asked if the Center could organize a job fair at the Salisbury plant for their entire plant (373 employees) on Monday,September 11,2017. The DuraFiber Job Fair was held at their facility." There was a total of 20 employers,with most bringing more than one representative to discuss different occupations within their companies.

Employees who were working at that time were allowed time to come in and meet with employers." Employees who were not scheduled to work at that time were invited to come to the plant to attend the job fair on their own time." Some employers accepted resumes,some referred interested applicants to their web site,and some asked the applicants to complete paper application forms.

A team of staff from NCWorks Career Center-Rowan and the Centralina Workforce Development Board facilitated the job fair. The job seekers indicated that they felt hopeful they would have additional contact with some of the employers they met." The employers said they had seen some good prospects for their job openings.

Site By Kaleidoscopic
Powered By PageCraftCMS